Intelligent 3D technology opens the door to the future 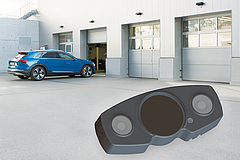 Recent years have seen a sharp increase in the importance of energy-efficient construction in both private households and the commercial sector. There is still a great deal of untapped energy-saving potential to be harnessed, especially in companies. In industry, for example, an estimated 61 billion kWh are used for heating or cooling buildings. Industrial companies in particular lose a great deal of energy as their doors are opened frequently and remain open for lengthy periods. BBC Bircher Smart Access has been tackling this problem head-on and has developed an ideal solution: Hyperion 3D – the world’s first height-adaptive opening system based on stereoscopy.

Systematic energy savings
With Hyperion 3D, the industrial door is opened just far enough to allow vehicles or people to pass through safely. The intelligent sensor system minimizes the number, height and duration of openings in vertical gates and reduces the number of unwanted door openings. The Hyperion 3D optimises the way the door opens, meaning that considerably less thermal energy escapes into the atmosphere. This significantly reduces energy consumption and the associated costs. Its aim is to help industrial companies to monitor their energy budget and reduce air conditioning-related energy costs whilst simultaneously protecting the environment. The energy saving potential can be up to 64%, depending on the door size, number of daily opening operations, vehicle heights, etc. Consequently, Hyperion 3D pays for itself within a few months. The Hyperion 3D system is compatible with virtually all commercially available vertical doors. This means that Hyperion 3D can even be retrofitted to industrial doors that have been in operation for some time, providing an ecological and economical modernisation solution. As a worthwhile investment in sustainable door operation, the system fulfils stringent requirements regarding quality, engineering, processing and reliability.

3D sensor system serves as the door’s eyes and brain
Hyperion 3D detects the size, velocity, direction and distance of approaching vehicles or people. In doing so, the system is capable of differentiating between people and vehicles and masking them on a selective basis. If a fork lift truck approaches the industrial door, for example, Hyperion 3D instructs the door control system to open at the latest possible point, and then only to the respective vehicle height plus a preset safety distance. The signal is given to close the door immediately after the vehicle has cleared the doorway, provided that no other objects are approaching the door or are located in the individually configurable safety zone.

Following an easy installation process, the system calibrates itself in a matter of minutes. It can, however, also be operated via mobile app. The detection area can be individually adjusted to the specific on-site conditions. Its intelligent algorithm independently masks environmental influences such as strong light irradiation, shadowing, rain or snow fall, thereby ensuring a particularly high level of sensor availability.

Redefining cross traffic masking
Hyperion 3D features a 3D camera system, which gives it stereoscopic vision. The sensor system actively measures objects in its area of vision, meaning that the industrial door opens in a height-adaptive way based on the object in question. The concept of cross traffic masking is also redefined: every object within the sensor field is tracked continuously. An opening impulse is only triggered when the object’s direction of movement is established and authentication is issued.

High-tech engineered in Switzerland
“We started with the aim of improving the energy balance of vertical doors,” explains Daniel Nef, CEO at BBC Bircher Smart Access. “By providing height-variable door opening in conjunction with virtually perfect cross traffic masking, we enable our customers to save significant amounts of energy. The Hyperion 3D system enables fully configurable approach area monitoring via app and sets new standards for the classification of people and vehicles. With Hyperion 3D, we are establishing ourselves as a key player in the world of 3D sensor technology. Nowadays, stereoscopy is so sophisticated that it gives us huge potential to make access systems more convenient, safer and more energy-efficient.”